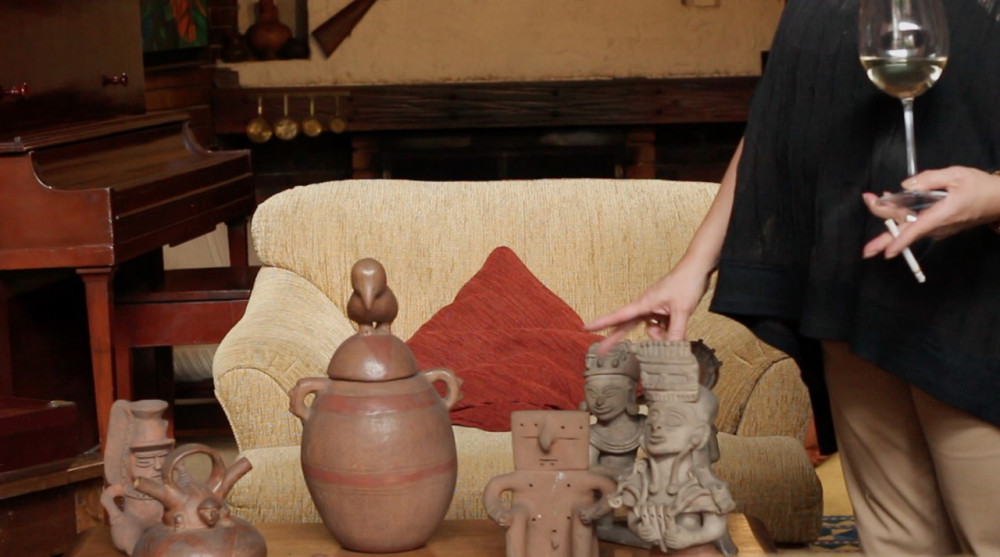 Chelsea Space is pleased to announce the solo presentation of the film ...Y el barro se hizo eterno (...And the Mud Became Eternal) by Kate Morrell.

Developed during a ten-month British Council residency in Bogotá, Colombia, the film centres around conversations with four Bogotána women, documenting their private collections of pre-Columbian ceramics, displayed within domestic settings and embedded within the interior architecture of their homes. We hear them speak of shifting value systems, rights and protections; engaging with urgent debates around cultural restitution and repatriation. With (relatively recent) government laws put into place by the Ministry of Culture, prohibiting the export and transfer of cultural assets and stating that private collections must be declared; the women – identities withheld – articulate varied rationale for keeping commoditised objects (ceramics and gold) in circulation.

The term ‘guaqueria’ – the act of looting archaeological sites – has been used in Colombia since the mid 19th century. Illicit excavation by guaqueros serve the existence of many public museums and private collections in Bogotá. Within the film, looting is posited as political resistance, working in opposition to nationalist, colonial and Western-oriented approaches to archaeology and museum collecting practices.

The film incorporates museum archive footage from 1980s-90s along with newly shot video and photography, interlacing the public and private, blurring ‘expert’ knowledge with non-scientific and personal language. Conversations are held in Spanish and part-translated to English to agitate further translation tensions and withholding of new knowledge.

Kate Morrell’s practice focuses on archives, collections and libraries to develop projects that identify and respond to marginal or overlooked histories. This work questions the conventional logics that serve and organise collections. By doing this, it invites critical re-readings of the hierarchies and structures of power which are given voice in their presentation. Morrell has been in residence in and developed work from, The Jacquetta Hawkes Archive, University of Bradford ('Pots before words', 2014, solo show); Armitt Museum, Cumbria ('Sublime Transactions', 2012, group show); Kendal Museum, Cumbria ('Lustre', 2015, solo commission) with Legion TV, London; Sitterwerk Art Library & Material Archive, Switzerland (2018).

In 2017 Morrell was awarded a British Council Scholarship at FLORA, a ten-month residency in Bogotá, Colombia; In 2018 she received funding from Arts Council England and British Council’s Artists’ International Development Fund to undertake a period of research and development in Switzerland. More recently, Morrell was selected for the Hospitalfield Autumn Residency 2019, Arbroath, Scotland.