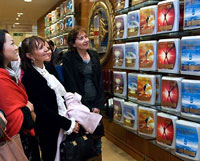 A permanent, free, public information exhibition, including audio-visual presentations of the Church's work across society that covers drugs and crime prevention, literacy campaigns, arresting the decline in moral values, human rights abuses including those in the mental health field, and disaster relief work carried out by the Scientology Volunteer Ministers. It also includes a display on the life and works of author and humanitarian L. Ron Hubbard, founder of the Scientology religion, plus introductory film showings, live lectures and materials for anyone to learn more about Dianetics and Scientology for themselves.

Reviewed by Anonymous
Google: Operation Snow White, Paulette Cooper, Lisa McPhearson and find out the truth about scientology before you 'try it for yourself'. Scientology is not recognised as a religion or a charity in the UK because under scrutiny it could not prove it provided any public benefit. A UK judge has called it a 'Dangerous Cult'.

Reviewed by Anonymous
I'm not sure it's for me as I haven't yet found out enough about it. I was curious as to why so many famous celebs are involved in something that gets a lot of hate. I'm not a great fan of Tom Cruise as an actor but I don't think he is stupid. He probably wouldn't be as successful as he is if he was. The common thing about every negative thing I've seen about scientology is &quot;nothing to see here folks&quot;. The same kind of thing is said about many things that I've found are worth checking out. So I checked it out. It really isn't as weird as it's made out. Either that or I'm weirder than I thought!

It looks to me like they have some interesting things to say about why people aren't as successful as they might be. I'm not saying its a good thing but I'm taking a look for myself.

Reviewed by Anonymous
I only ended up going in to shelter from a heavy storm as I was passing - and I'm not sure you can really call this an 'exhibition'. All you basically do is sit and watch a few videos and then they try the 'hard sell' to try and get you to sign up for some courses and buy the Dianetics book, which I later found you can get online much cheaper. I found them quite forceful to try and get my personal information - presumably to sign me up to their mailing list - and &quot;I'm really not interested&quot; seems not to be in their vocabulary.

It's a strange building (I believe it used to belong to an oil company), it seemed very quiet and almost deserted for a builing of it size, and the few people I did see had fake looking forced smiles and almost &quot;out of it&quot; as if they'd been smoking something strange. It's no wonder Scientology gets called a cult.

By they way, I'm not sure why they call themselves a &quot;major new religion&quot; when I saw nothing even remotely religious by normal standards about the building, or in the contents of the videos they showed me - and it seems they aren't recognised as one in the UK either. They claim millions of members - but I can't have seen more than 5 people that day.