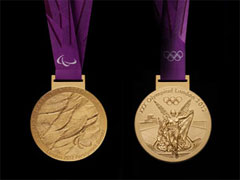 This display tells the story of the production of the medals for the London 2012 Olympic and Paralympic Games, from the mining of the metal by Rio Tinto to the creation of the designs by David Watkins and Lin Cheung and production by the Royal Mint. Examples of both the London 2012 Olympic and Paralympic victory medals – shown here publicly for the first time – are the high point of the display.

Historical context for these medals is provided by 19th and 20th century objects highlighting the longstanding links between Britain and the Olympic and Paralympic movements. Britain played a crucial role in the creation of both the modern Olympics and Paralympics. ‘Olympian Games’ first took place in the Shropshire town of Much Wenlock in 1850. These games greatly inspired Frenchman Pierre de Coubertin, who attended the 1890 Wenlock games and founded the modern Olympic Games in 1896. The Paralympic Games derive from games held in 1948 at Stoke Mandeville Hospital, Buckinghamshire, for people injured in the Second World War. The mascots of the London 2012 Olympic and Paralympic Games are named Wenlock and Mandeville in recognition of these earlier games.

This display includes a range of objects from the 19th-century Shropshire games alongside medals from the 1908 and 1948 Olympic Games held in London and the 1960 and 1984 Paralympic Games.