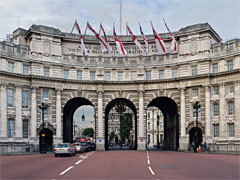 Admiralty Arch is a a Grade I listed building and currently home to the Cabinet Office (although it's headquarters are still located in Whitehall). The building incorporates an archway between The Mall that extends to the southwest, and Trafalgar Square to the northeast. Designed by Sir Aston Webb and completed in 1912, Admiralty Arch received its name because it adjoins the Old Admiralty Building.

The building was commissioned by King Edward VII in memory of his mother Queen Victoria. The Latin inscription along the top reads: “ANNO : DECIMO : EDWARDI : SEPTIMI : REGIS :VICTORIÆ : REGINÆ : CIVES : GRATISSIMI : MDCCCCX “ which means ‘In the tenth year of King Edward VII, to Queen Victoria, from most grateful citizens, 1910’