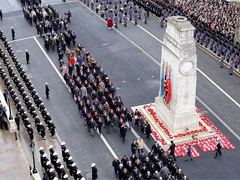 The word “cenotaph” means “empty tomb” in Greek, therefore its significance nowadays relates to honouring the dead. The Cenotaph in Whitehall was first erected after the First World War, to remember those who lost their lives in battle and celebrate the first anniversary of the Armistice. Nowadays it commemorates the dead of every war fought by Britain and the Commonwealth since 1918. The simple construction, designed by Edwin Lutyens, was initially made of wood and plaster, and upon its unveiling people flocked here to lay down wreaths. This encouraged the decision to make it a permanent feature, and the Cenotaph was re-built in Portland stone, with a carved wreath on either side. Flags for the British Army, Navy and Royal Airforce are displayed at the base. On Remembrance Day, during the march down Whitehall, the Queen and leading politicians lay wreaths at the foot of the tower. There is only one other similar monument commemorating the dead in Britain, in Belfast, Northern Ireland.