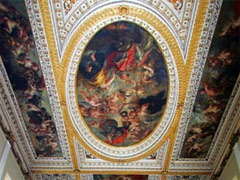 Located in Whitehall, near the Horse Guards Parade stands the magnificent Banqueting House. It is the only complete building of the Palace of Whitehall to remain standing. The Palace was acquired from Cardinal Wolsey by Henry VIII and became the Royal residence until the ascension of James I. The Banqueting House was purpose built for state occasions. After the installation of grand ceiling panels the purpose of the banquet hall was changed to a reception area for greeting foreign dignitaries. A scaffold was built against the North of the Banqueting House in 1649. Thousands of spectators gathered to watch the beheading of Charles I. A commemorative service is still held here every year on January 10th. Oliver Cromwell lived at the Palace from 1654 until his death in 1660. After the restoration of the monarchy with the ascension of Charles II, the palace once again became the Royal residence and the Banqueting House once again was used for receiving guests. In 1698 a devastating fire burned Whitehall Palace to the ground. Sir Christopher Wren was commissioned to convert the Banqueting House into a chapel to replace the one destroyed in the fire. The Banqueting House is now a museum, holding many fine paintings and the building itself offering an incomparable setting. There is wheelchair access and a gift shop on-site.