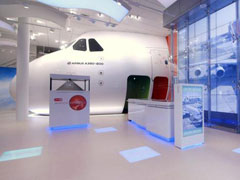 The Dubai-based airline Emirates first introduced the cable cars to London, which cross the Thames between the Royal Docks and Greenwich Peninsula. Now they’ve opened the Aviation Experience, which people have a go at flying a plane.

Also located on the Greenwich Peninsula, where the cable cars alight, there are two life-size models of an Airbus A380 and a Boeing B777, where you can get behind the controls and have a go at taking off, flying over 300 square metres and landing, just like a real pilot. The half hour experience begins by selecting an airport and the weather conditions, and up to four people can hop into a plane at the same time.