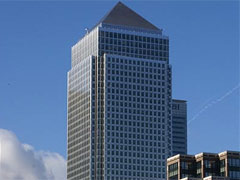 On the site of the former West India Docks is Britain’s third tallest building, Canary Wharf. Completed in 1991, at which point it was the tallest building in Britain, one Canada Square stands 800ft high and has more than fifty floors. Since then it has been eclipsed by The Shard, and 22 Bishopsgate, both of which are taller.

The Wharf, which covers 400,000 square meters, was designed by architects Cesar Pelli and Associates and Adamson Associate Architects Ltd. The initial cost to developers Olympia and York was more than eight hundred million pounds sterling.

Canary Wharf is named after the Canary Islands, the prime source of imports received during its time as a working dock. There are more than 55,000 people who work in the building itself. Situated within the Canary Wharf development are offices, a retail centre, a Dockland light Railway station and a London underground station.

Sadly the Canary Wharf building is not open to the public, but views of the breathtaking construction can be seen from all over London and are especially spectacular from one of the Thames river rides.