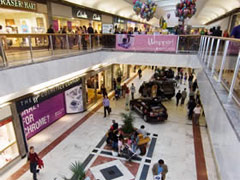 Brent Cross Shopping Centre was the first major indoor shopping centre to be opened in the UK. Opened in 1976, the public’s initial reaction was one of uncertainty- could the Centre offer anything more than the high street? The first major difference was that most of the shops stayed open until 8pm every day except Sunday. The high street shops were usually only open for half a day during the week and only remained open past 3pm on weekends. This meant that customers visited Brent Cross after work and the project became a huge success.
Over the last 25 years Brent Cross Shopping Centre has met a need in the 7,000,000 customers who live in the Brent Cross area. The Centre underwent a full refurbishment in 1995 and a significant extension of the building was built the same year. Brent Cross had originally opened with 75 shops and cafes- there are now well over 100 businesses operating within the centre.
The original concept for the centre was to have the selection of the high street, undercover and easily accessible. The owners recently spent £500,000 on refurbishing the toilet facilities- illustrating the importance and value they place on keeping their customers happy. It is this ethos that continues to attract more and more to the centres facilities.