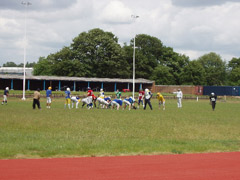 This stadium originally had the rather unremarkable name West London Stadium, however in 1993 it took the name of a very remarkable man, who had won the World Championship and the Olympic 100 metre competition – he still holds the British record for the 100 m. Located in Wormwood Scrubs, and wedged helpfully between Hammersmith Hospital and the prison, the stadium has eight 400 metre running lanes and two eight-lane 100 metre tracks, as well as facilities for long jump, pole jump, discus, and all other athletic fields. There are pitches for rugby, football and baseball. This is also the home stadium of the Chiswick Hockey Club and the London Nigerian Rugby Club. Bear in mind that you have to book the pitches in advance, and charges apply. The busiest times are generally Monday to Thursday 18:00 - 22:00.