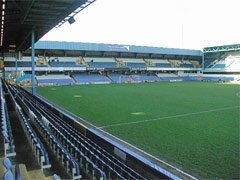 Named after Mr Robert Owen Loftus Versfeld, who was the founder of organised sports in South Africa as well as an important contributor to the early years of Queens Park Rangers, the Loftus Road Stadium opened in 1904 and was inhabited by QPR after the first world war.

For the beginning of the 1994/95 season the stadium was converted into an all-seater stadium with a current capacity of 19,100. Shortly afterward in 1996 the owners announced their decision to sell the club. It was bought by Media Tycoon Chris Wright who also bought Wasps Rugby Union Club and decided to have both clubs sharing the Loftus Road ground.

Loftus Road was the first 'neutral' venue that was used to host a series of international friendlies (i.e. not including England) such as the 'home' ties between Jamaica and Australia since there are large Australian and Caribbean populations in West London and therefore there is a strong contingent of supporters.