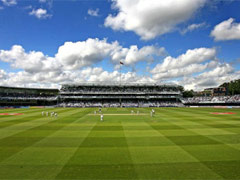 Lords Cricket Ground is named after Thomas Lord, a fine bowler who was approached to establish a flat and fair ground for the increasingly popular elitist sport of the mid seventeen hundreds. The decision was made because the noblemen and aristocracy who played the game, became tired of the crowds that gathered to watch them play.

The first match ever to be played on the ground was between Middlesex and Essex in 1787. This match symbolized the establishment of the Marylebone Cricket Club. In the following year the rules of Cricket were recorded to establish the standard by which Cricket is still played.

After a short stay at Marylebone, the ground was moved to its present site in St. Johns Wood, where the new ground was built on the site of a former duck pond!

The wicket was prepared before a match by allowing a sheep to graze the wicket. Perhaps unsurprisingly dissatisfied with the results of the sheep's work, Lords were one of the first to invest in a mowing machine, and the ground appointed its first groundsman in 1864.

In 1877 an England team boarded a steamer and traveled for eight weeks to Australia, where a cricket league had been established, giving birth to the modern Ashes tournament.

After a fire destroyed the original pavilion, in 1889 the first stone for a modern pavilion was laid. The building is now listed and stands as a monument to the game. Lords is the home to Middlesex County Cricket Club and the MCC Library and museum are a popular attraction for visitors, holding the Ashes Urn and Wisden Trophy.

It is a remarkable testament to the club that the home of Cricket is still in use today and visitors are able to tour the ground where it all started more than 200 years ago.