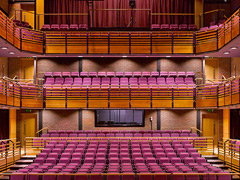 The actor and writer Michael Croft created and became director of National Youth Theatre of Great Britain, a position he held for over 20 years.Throughout his tenure as theatre director Croft openly struggled to obtain funding from the Arts Council, but his efforts were rewarded when he was given an OBE in 1971.

This modestly sized theatre (it seats 350) opened in 2009 was named in Croft’s honour. It’s located in Dulwich, within Alleyn’s School, where Croft taught drama for a number of years. The theatre’s remit is broad, including children’s shows, musicals, Shakespeare plays, comedies, concerts and film screenings. Ticket prices vary with most shows costing in the region of £10 to £15. The theatre is fully accessible for those with mobility problems.