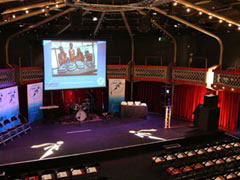 The story of this performing arts venue in Deptford is one of perseverance. By the end of the 19th century, after the local docks had closed down, the area’s inhabitants found themselves living in abject poverty. As a result a group of generous individuals decided to start the Deptford Fund, with the aim of improving the quality of life of the community. In 1898 they established The Albany Institute, initially as a community centre. In the 60s it began hosting fringe theatre, and later supported the famous Rock Against Racism concerts, which led to an alleged arson attack that burnt the theatre down in 1978. A new building was opened in 1982 by Lady Diana, with a schedule encompassing a diverse mix of music, theatre and comedy; in recent years this has broadened further to include cabaret, dance, art and film.