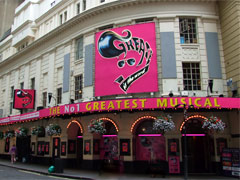 The Piccadilly Theatre was designed by Bertie Crewe and Edward Stone. It opened in 1928, and claims to be built of enough bricks to stretch from London to Paris, such is its size! The theatre was refurbished and the 1400 seats were reduced to 1232 over three floors to increase comfort. Though spectacular from the outside, the Art Deco interior of the building is breathtaking and a really fine example of the style.

The first production at the Piccadilly Theatre was the musical ‘Blue Eyes’ starring Evelyn Laye and written by Jerome Kern. History was made in the theatre's opening year when the first ever talking movie to be shown in Britain was played at the Piccadilly; It was Al Jolson’s second movie ‘The Singing Fool’. The Piccadilly embraced the ‘talkies’ and they continued to be shown here for the next few years.

Though a magnificent building, the Piccadilly Theatre suffers from being concealed from much of Piccadilly Circus. This may explain why the Piccadilly Theatre has a history of short running productions. However despite the position of the building it is modern and equipped to stage all but the most complex of productions, which in recent years has included 'Noises Off', 'Jersey Boys' and 'Pretty Woman. 'Moulin Rouge' is due to open there in 2021.