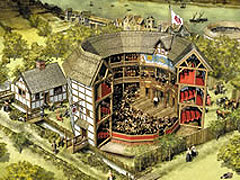 The Rose Theatre was built in 1587 by local businessman Philip Henslowe and was only the fifth purpose built theatre in London. The land to build the Rose Theatre was relatively inexpensive because it shared the Bankside area with Brothels, Bear-baiting arenas and other less savoury establishments. The successful actor Edward Alleyn married Henslowes step-daughter, an association which proved to be important to the success of the Rose. More is known about the Rose than many other theatre in that time because of the miraculous survival of Henslow's diary- giving specific information about the various actors and plays that graced it's stage, and the audiences they attracted. Amongst the plays performed at the Rose were Dr. Faustus, Henry VI part one and Titus Andronicus. The success of the Rose meant that theatres like the Swan and the Globe were attracted to the Bankside area. By comparison the Rose seemed small and insignificant and soon disappeared completely. In 1989 the remains of the Rose were discovered during excavations for new office buildings. It took a huge campaign from actors and theatre enthusiasts to stop building on the site and it has since been saved. Tours can now be taken around this historic site and visitors can now see the remains of the stage that started the theatre district on Bankside.