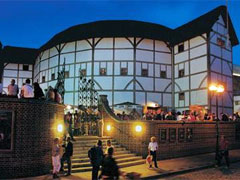 Founded by Sam Wanamaker, American actor and director, and sitting next to the Tate Modern on London's Bankside, the globe is entirely dedicated to Shakespeare's works and the venue for which they were created. Construction of the Globe Theatre began in 1993 on foundations six meters deep. Sam Wanamaker died later that year.

The globe consists of three interlinked components; the Globe Theatre itself, a venue for Shakespeare’s works to be performed and enjoyed by all; secondly Globe Education, which is a forum for young people to receive education about the world's most celebrated playwright and to understand the context and venue for which the works were written; and thirdly Shakespeare's Globe Exhibition, the most comprehensive exhibition in the world, dedicated to Shakespeare, his influence, his contemporaries, the actors and stage designers that shared his vision and the audience which justified his work.

Every year three quarters of a million people visit the Globe and experience Sam Wanamaker's testimony to the Bard. The total development cost ran into many, many millions but has brought about a site which is over two thousand square meters celebrating one of Britain's institutions.

Performances at the Globe are faithful to the facilities available four hundred years ago, music and sound effects are performed live in the outdoor theatre (and some in other performance spaces). The majority of the audience stand in the open air regardless of wind and rain (umbrellas aren't allowed). This was how the audiences of Shakespeare’s day would have seen the performances and these traditions have continued to be fully observed. 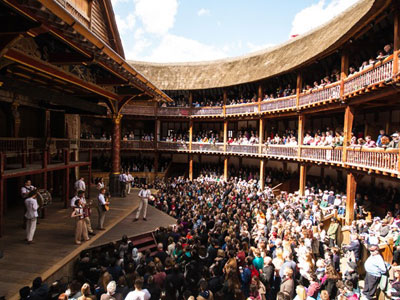 Take a tour of Shakespeare's Globe

Transport yourself back to a theatrical time