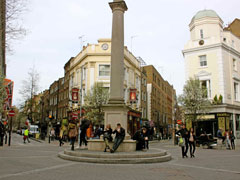 If you prefer your luxury shopping to be done on quaint cobbled streets rather than in department stores, and the delights of Sloane Street are just a tad too expensive, Seven Dials beckons.

Originally built in the 1690s, it’s so-called because the area consists of seven streets that meet in the middle, like the dials of the sun. Its creator Thomas Neale wanted Seven Dials to become one of the most fashionable parts of London, but instead it became a slum shortly after his death. In 1974 it was declared a Conservation Area and things have been on the up ever since. Upmarket shops are favoured, so Seven Dials is home to high end sex shop Coco De Mer, sock retailers Tabio and shoe sellers Poste Mistress, as well as branches of beauty shops Benefit and Shu Uemura. It’s also a hotspot for eating out, so you’ll have no problems finding a quality food stop whilst enjoying your retail therapy.