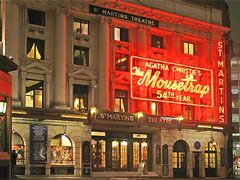 Designed by W.G.R. Sprague and opened on 23rd November 1916, St. Martins Theatre has a capacity of more than five hundred across three levels. The venue was originally designed as a companion theatre to the Ambassadors Theatre, situated nearby. Though the Ambassadors Theatre boasts an intricate, plastered interior, St. Martins was one of the first in the area to use polished wooden floors, and has a wholly more sparse and modern feel.

The theatre has staged plays by Noel Coward, John Galsworthy and Frederick Lonsdale. Unusually the venue has remained in the family of its original owners since it opened and was described upon it opening as ‘giving the impression of being a private theatre provided by some patron of the dramatic art for the entertainment of his friends.’

The highly acclaimed ‘Mousetrap’ was moved after 22 years to St. Martins from the Ambassadors Theatre with great success and critical praise.
Today St. Martins Theatre has been refurbished and still draws capacity audiences. A replica of the original canopy has been fitted and silk wallpaper hung throughout the building. One of the few privately owned Theatres in London, St. Martins still stages Agatha Christie's ‘Mousetrap’ as well as a selection of other plays and performance pieces. Agatha Christie’s The Mousetrap is now the longest-running production in the world, having been staged in the West End since 1952!