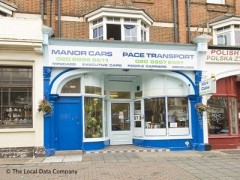 Reviewed by Alan from Italy
Excellent

Reviewed by Thim Engel from Ealing, London
Having used Manor Cars for years we had started taking their service for granted - mostly arriving on time or being just a few minutes late at the most.
Latest experience threw me: expecting a driver to meet me at Heathrow Airport; when through immigration etc I was told that the driver was still a half hour away. Cancelled booking and took a black cab instead.
When complaining to the Controller - both on the day and the following Monday morning - no reason given and no follow up whatsoever.
Now looking for an alternative minicab company...

Reviewed by Steve Farr from Boston
Just great service. Once you are on their system you can call at 1am to get an airport pickup and no hassle.

Reviewed by Dr Fenton from EALING
We regularly use Manor Cars and have done for many years. they always arrive on time, their staff are very polite and the fares are reasonable. We don't use anyone else.

Reviewed by CPE Evans from Ealing
I have used Manor Cars for years and been very pleased with their service. But we ordered a car from Ealing to Richmond on Saturday evening and were taken via the North Circular Road and got totally stuck on Chiswick roundabout. We had to bail out and take the tube! I do expect a local taxi firm to know the local traffic situation.

Reviewed by JULIE WOODHEAD from Manchester
The taxi driver (we have his number) took us all round the houses &amp; charged us £12. He would not put the post code in his sat nav . Now we know why .
Several other people (at least 6 other taxis were called using other firms ) who were Londoners - who knew their way had done the same journey &amp; paid £5 . Thought this practice had been weeded out. clearly not
Managements comments &amp; a refund would be welcome

Reviewed by Mrs. Bettina Thwaite from West Ealing
Husband and I have been using Manor Cars/Pace Transport now for 30+ years. Heathrow, Gatwick, during Tube strikes, etc. Never ever let us down, even arriving a tad early sometimes. Would highly recommend them

Reviewed by Jonathan from West ealing
Manor Cars are ok i have used them on and off for round 2 years but recently there 15 minutes late to every job over charged and do not listen to their customers. They have just lost me as loyal customer for being hot headed, late and charging me more for Expenses they never justified... you them at your on caution... there a bit of a gamble

Reviewed by Michael from Ealing
Use them all the time. Very reliable and great prices - put a lot of other local firms to shame

Reviewed by Gerry from Ealing
The mini-cab firm who send a driver with what at best can be described as 'limited English', who is driving for 2-3 days and who does not know where Heathrow T5 is.......need I say any more?

Reply from Imran Manager
we take all our customers feed back very seriously , as you mentioned that driver could not speak English and did not know how to get T5. we are raising this point with Public carriage office (TFL) (Who issue lenience to all drivers they take knowledge test as well English test before they issue a lenience to the drivers.
Please raise this point to PCO they might listen to you.

Reviewed by Ka11
Conviently placed on the avenue next to a hotel and opposite a wine bar so service is usually pretty quick, however they are seriously over priced. £10 for a 2 mile journey when the average is £4! Something has gone wrong there!