Why Are Hot Cross Buns for Easter?

How did this tasty treat become part of a religious ritual? 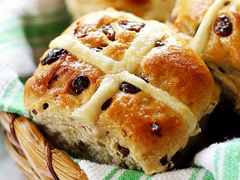 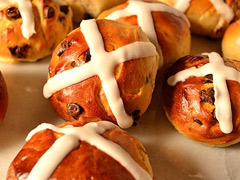 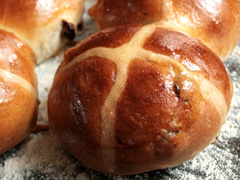 Ah, the comforting hot cross bun, with its rich yeasty smell emanating from the oven (or if you’re as impatient as me, from the toaster, which inevitably results in corners that have burnt to an inedible crisp), the warm dough, the fruity taste and the sticky golden exterior. They are sold all year round and are perfect components of afternoon tea or breakfast, however the Christian tradition is to eat them on Good Friday alone. How did this tasty treat become part of a religious ritual?

The most common recipe has yeast, milk, flour, butter, eggs, sugar, raisins, and a combination of cinnamon, cloves, nutmeg and allspice, but some older recipes called for saffron and mace. Throughout the 1600s trade with faraway countries became easier, and new, exotic ingredients like spices and sugar found their way into British kitchens. The introduction of these items increased the popularity of fruit breads, however they actually have a much older history.

Remains of cakes marked with crosses have been found among ruins in Herculaneum, an ancient Roman city near Pompeii, suggesting Romans were eating confectionery very similar to hot cross buns. The crosses were crudely marked into the bread with a knife, rather than piped on with pastry, although this wasn’t always intended to symbolise the Christian cross. Pagan Saxons used a cross to depict the four quarters of the moon, and in other cultures it was simply meant to show the lines along which the bun should be divided.

There are older theories around, such as that of the ancient Egyptians offering small round buns to the goddess of the moon, the cross representing two ox horns, the symbol for strength and sovereignty. Other possible explanations point to their origin during the Greek Empire, or as a Jewish Passover food. The only certainty is that the term “hot cross bun” first appeared in the Oxford English Dictionary in 1733, along with a folk song: “Good Friday comes this month, the old woman runs, with one or two a Penny hot cross Bunns”. While at first glance this seems little more than gibberish, it does tell us that the tradition of eating hot cross buns on Good Friday must have started well before the date of the dictionary’s publication.
\n\nIn the 14th century, Christian missionaries were tirelessly campaigning to convert the population. They went as far as reinterpreting the humble bun, and the cross would forever be associated with the Church. It seemed to make perfect sense, as eating the bread could be linked to the Holy Communion.

In the late 16th century, Queen Elizabeth I passed a law decreeing that the sale of buns, spiced cakes, bread and biscuits in London was limited to funerals and the Friday before Easter and Christmas, and the tradition to eat them on Good Friday was born. Why ban such a seemingly harmless food? The deeply superstitious population believed the buns had medicinal or magical properties, and the Church were fearful of these powers being abused. Some thought the buns could protect their home from fire or bad luck, and sailors would take them on their travels to prevent shipwreck. It was also commonly believed that a bun baked on Good Friday would never go mouldy.

Despite the restriction it was not illegal to bake them at home on any day of the year, and eventually it became too difficult to regulate production. In the 1700s, once the ban was lifted, the Chelsea Bun House became the major seller of hot cross buns (and of its close relative the Chelsea bun) and at Easter customers would arrive in droves. In the Victorian era street vendors sold them to passers-by. \n\nBut that’s not all in terms of folklore. In the 19th century, a widow living in Bromley-by-Bow awaited the return of her son from sea. It was Good Friday, and she had baked him a hot cross bun. The lad never came home, but his mother refused to give up hope. She kept the bun, and baked a new one each year on the same date, adding them to the collection. To pay homage to this story, the Hot Cross Bun Ceremony takes place every Good Friday at The Widow’s Son, a pub situated on the site of the woman’s home. Sailors from the Royal Navy hang buns above the bar to pay their respects to those who lost their lives at sea (where they remain, in a net, as they don’t go mouldy). The ceremony has been celebrated for almost 150 years (the pub was built in 1848), but health inspectors may be pleased to know that a fire took with it some of the older relics around 15 years ago.

Another annual ceremony takes place on Good Friday at St Bartholomew-the-Great in Smithfield. At around 11.30 am hot buttered buns are distributed to widows and children courtesy of the Butterworth Charity. The tradition has been practised since the 1800s, when 21 widows were selected each year to receive a donation of sixpence from the Church.

Despite the ties between hot cross buns and Easter, supermarkets stock them all year round, although one and a half million sell in the run up to Easter, as we are, after all, still sticklers for tradition. The basic recipe has been jazzed up for commercial purposes with things like chocolate chips, toffee, and rhubarb jam. Hot cross buns are available as part of the Fortnum and Mason and Harrods sells them in pretty packaging. The most popular choice is good old M&S however, who sell 28% of all hot cross buns in the UK, but will Heston Blumenthal’s mandarin and Earl Grey variety for Waitrose change all that? 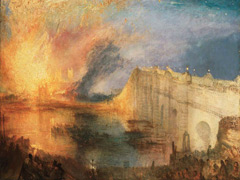 London in Pictures
We’ve rounded up some poignant images artists have created of the capital over the last few hundred years. 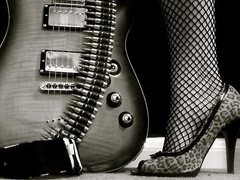 Sex and Drugs and Rock and Roll
A brief run-through of London’s most debauched moments...