We meet Bambi Blue; a concoction of circus, freakshow and fire skills! 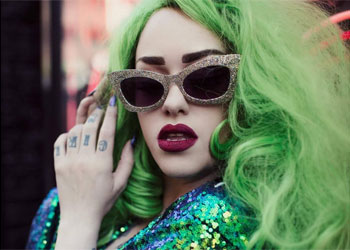 Describing herself as ‘leaving my mark on the scene with a concoction of circus, freakshow and fire skills, incorporated into an array of B movie-esque acts, topped with a scrawling of red glittery lipstick’, Bambi’s exotic shows have seen her perform internationally at the Cannes film festival, Erotica, F1 in Singapore and Milan Fashion Week.

I think what I do is perform exactly how I want to. When someone is wearing a costume they’ve made for a show which they have created using a skill they worked for.. It's hard not to join in on my sheer delusional glee whilst I force you to believe for 4 minutes that I'm a mermaid. I like to shock my audience by sass. Stomping cigars out on my tongue and fan dancing on broken glass carpets also helps!

How did you get involved with Berlin Berlin and any standout or humorous highlights so far?

I have had an amazing relationship with Egg London for the last 4 years and even filmed part of my music video there. Berlin Berlin is always such a fun night to be booked for as I get to perform with a whole mix of my cabaret family and dance with the club kid world. My stand out highlight was doing my feather show in the Lewis G Burton’s Kuntskammer room and releasing two pillows full into the room at the end. Magical and suffocating.. very much my aesthetic :-)

I started performing in dance pageants age 5 and since then I’ve clawed my way onto every stage I could to be honest. At 18 I started doing showgirl dance gigs and London club performances. And at 21 I broke up with a really bad dude and became Bambi Blue. I had nothing to lose so I started performing my own shows and doing my thing and never looked back. I'm 28 now and I feel lucky. I choose to dress provocatively because I can. I'm a thick, pretty, sassy, shorty showgirl, So why not showcase that in a glittery thong? Onstage I'm this queen in my own head and I'm like, 'behold me bitches'. It doesn't really matter who agrees with my body or what it's wearing in that moment because the non-believers aren't part of my opulent scene!

I loved the intelligent dark assassin that hid behind a dumb blonde exterior of Marilyn Monroe. I loved Bettie Page's edge. Of course Dita Von Teese who I got to see live recently at my costume home - The Box London! And In London as a baby showgirl I remember moving here and being totally in love with Marnie Scarlet and Missy Fatale watching them perform and now they are two of my dearest friends!

Known for your sexy outfits all very tongue in cheek, where do you get your inspirations from? Do you create your own outfits or do you work with specific designers?

I get inspiration from B movie film artwork and costumes, 60’s showgirls…Bob Mackie and all the stuff he made Cher. Everything Thierry Mugler! I make all my own costumes and headdresses in my design house (Trashy Planets) apart from my latex which is all Am Statik custom made. She does amazing latex corsets!

I describe it as being a night creature. We nourish parties in our costumes and create a little moment with a performance and it's really special to be part of this at this time In London. The kids don't care anymore! We can survive being creatives and not be pushed into a corporate construct so to speak. My regular day job is creating costumes for The Box Soho and I love it. As a costumier it's lovely to see your work in action every week, live and moving!

Sum up what makes a good party performer/host and do you follow any other performers/club kids or artists?

I think what makes a good performer is being intuitive to the crowd you have around you. Read the room and get them to the same place as you. I love following other showgirls and cabaret performers and seeing clips of their shows on stories and I love seeing club kids and queens creating a whole other world with their feed. My favourites are @charitykase and @tetebang

Massively important. Social media is very intense and it certainly changed my job a lot. There is a need to update my socials constantly with shows and pictures and it's all admin. Being in a great club, dancing, performing to a roaring crowd is what makes my job fun. It's better to be there live than watching later on a little screen! I do love cataloguing my journey as a performer and costumier though. Instagram sometimes makes me feel like Cher in ‘Clueless’ as I skim through photos deciding which costume to wear!

Bambi Blue is part of our hedonistic cast of performers and hosts heading up the Berlin Berlin: Tainted Love edition on Saturday February 23rd alongside Berlin’s Pornceptual collective with DJs Deepneue and Projekt Gestalten and Egg Resident Luther Vine. The Homostash, Kuntskammer and Monster Queen crews host their own rooms and for all info go to www.egglondon.co.uk