We catch up with the outlandish Métaraph! 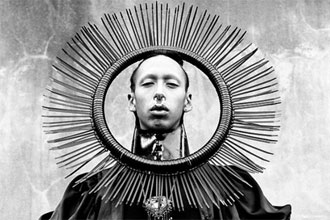 Shape shifting through various art & performance disciplines to distort reality, we catch up with the uber cool Vogue dancer, DJ & jewellery designer Métaraph. From London Fashion Week to alternative clubbing, Métaraph’s performances and looks are a celebration of life and beyond featuring rituals, tribal art and more.

We catch up with the outlandish Métaraph ahead of his show at the Easter Sunday Berlin Berlin Uncut event on Sunday April 21st, where he joins a multi talented cast of performers and hosts including Kokaine Tyson, Luke Harris, Max The Hybrid Pup, Chrissy Darling and Parma Ham.

My performances are always contextualised depending on the kind of night I’m working for. I love to surprise the crowd - it’s a great part of my performances.

From fashion shows to vogueing and making elaborate jewellery & headwear, you’re a multi talented guys and what inspires you in your work and how you develop it especially when related to live performances such as at Berlin Berlin?

My work is inspired by the connection with my ethnic roots and by Life itself, with all its encounters, cities that I visit, places that I see. After everything is elaborated unconsciously towards the creation of an aesthetic, a jewel, an accessory and so forth. All of my performances are body based and connected with movement because I used to be a contemporary dancer that is now exploring more the vogue-ing movements.

I started performing In London 3 years ago at Coven, a witchy experimental night that’s run by friends of mine which used to be held at the Resistance Gallery. I’ve been performing in various contexts such as in galleries, museums, private event and many clubs in London and abroad.
The aesthetic of a performer is quiet crucial in the performance itself. It releases a strong energy on yourself but also into the crowd that watch.

I never looked up to any particular artist during my adolescence. I don't come from an artistic background, I’m from a small village in south of Italy and never studied art in school. I’ve learnt about art in life through practising my expression through different mediums. As time has gone by I’ve started to learn more about art and all its different disciplines .

Known for your jaw-dropping outfits and wild performances, where do you get your inspirations from? Do you create your own outfits or do you work with specific designers?

I do create my own outfit, looks and performances. I rarely collaborate with another designer regarding the creation of a look for a performance. I don’t necessarily plan the look days before but I go with the flow and feeling of the day. I’ve always created my looks with garments and stuff that I found around me and I barely buy something specific for an occasion but I often style and shape garments in different way to create more looks.

Sum up what makes a good party?

A great party is made by a nice venue, friendly staff and security, extravagant artists, blasting music and lots of dancing.

Dancing is a great way to release stress and enjoying the present moment. It’s essential to escape from the daily routine and meet new people and artists

Métaraph heads up the Live side of Berlin Berlin Uncut alongside Pornceptual showcase featuring DJ Boris, The Lady Machine and Deepneue and Buttons with Jacob Meehan, Father Figure and Wes Baggaley on Sunday April 21st at Egg LDN. Across the other floors catch the Homostash, Kuntskammer, Mønster Queen and Transister crews and all info on www.egglondon.co.uk