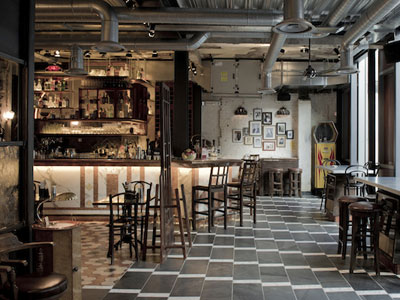 Wooh... that blackened dahl... we'll probably never forget it. Ever.

This is Dishoom's second all-day dining site in London and as with the Covent Garden original, models itself on the Irani Cafes of Bombay, India which were prevelant in the 1930s - 1960s. These original cafes, as opened by Persian immigrants of the day, have now all but disappeared, so Dishoom's aim is to keep their spirit alive here in London. Think old school style, elegance and charm and you'll be on the right lines. There is even an indoor-outdoor terrace to laze away an afternoon on come rain or shine... 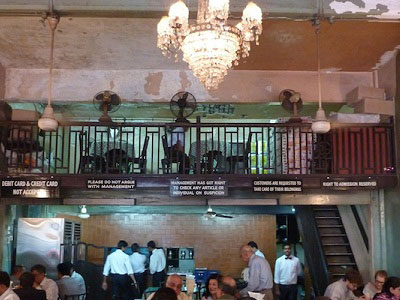 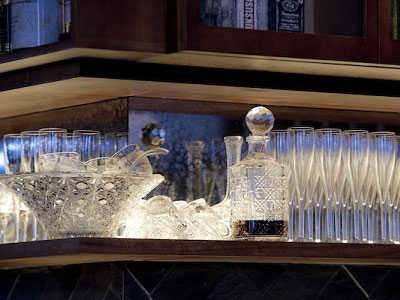 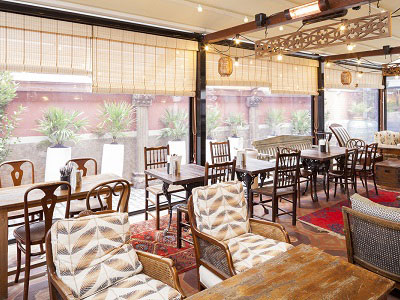 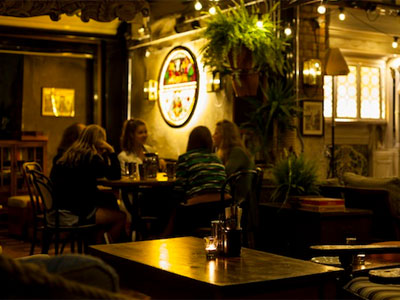 Just in case you didn’t know, since 1949 up to the present day, Bombay has been in a state of prohibition. Liquor can only be purchased and imbibed for the goodness of one’s health in separate area’s known as ‘Permit Rooms’. And since the small bar we visited is located in the Bombay style café and restaurant Dishoom, it was only natural that it should itself, The Permit Room. Not so isolated that you can’t feel the buzzing atmosphere of the popular restaurant next door but enough of its own thing to feel – just about - like a separate bar. The Permit Room is a mixture of Bombay chic, colonial era tradition and old-fashioned service.

The space is reasonably sized but aside from a few high perimeter tables and some stools at the bar, it is standing only. This lack of seating doesn’t help it seem like more than a glorified waiting room and the idea of coming here just for drinks is a little far fetched. The restaurant itself is huge and given the impeccable style of the design that continues into The Permit Room, it would have been nice to see a bit more space dedicated to it and the classic cocktails it serves. Those cocktails include juleps, sours, martinis and more and we can’t fault the menu. Try The Viceroy’s Old-Fashioned (an Indian twist on the classic with bay leaf reduction, green tea and orange bitters) or a refreshing Toddy Tapper julep (a mix of Ceylon, mint, berries, fennel and chilli over ice). The range of cocktails is almost too good - it took us twenty-minutes of looking and we still needed help from the barman. But if that’s the only problem where the drinks are concerned then they can probably live with that. At £8 or £9 each, the quality of the cocktails fit the attractive interior, although to really make your visit to The Permit Room, you’d really want a table to relax and appreciate everything going on in this busy space.

Located just off Redchurch Street, judging by what’s going on inside, it’s a surprise that this wasn’t Dishoom’s first London location. The super hip interior was made for a street that pairs the restaurant with outfits like Lounge Lover, A.P.C. and Boundary. Stylish is an understatement – the restaurant and bar sprawls across a huge space and fills itself with blackened mirrors, distressed wooden panelling and all manner of design flourishes that will have you double taking over your garlic naan.

The criteria on which you’re measured for a seat isn’t clear – there are stools at the bar, dainty café tables arranged centrally and a lot of intimate tables tucked away in cubby holes and corners. On this occasion, a table for two means straight to a cubbyhole, which is fine but we watched the buzzing bar area jealously.

Clearly, a lot of thought has gone into the décor but when you’re serving the type of food that is prepared with the diligence of slow cooking over 24 hours, details obviously come naturally.

We choose a selection of dishes from the succinct menu and wait for everything to arrive together. First comes the very special house black daal. The dish is slow cooked over a day or so and the blend of flavour is nothing short of exquisite. Accompanied by a moist chicken berry Britannia, the rich creamy texture is given the space it deserves to dominate.

If you’re in the mood for something hearty then the lamb raan bun comes recommended. Taking the lead from the current trend for all things pulled meat, the ‘sandwich’ pairs pulled lamb, marinated over days with a homemade slaw and green chillies. At £12.50 it’s not the cheapest pulled meat roll you’ll find but worth every penny all the same. The spicy, salty meat finds the perfect accompaniment in the Dishoom slaw that comes on the side. This is lip-smackingly good.

Perhaps the most refreshing thing about Dishoom is that you never once feel like you’re paying for the hip environment that is itself within one of Shoreditch’s most hip areas. The food is modestly priced for the quality that comes with it and a meal for two with Kingfisher beers comes in at under £40.00 with service.

The Permit Room at Dishoom

Spread a little Dishoom this Christmas 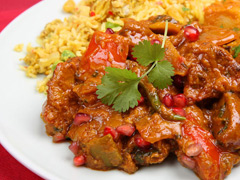 If you're out on the town and in the mood for a Ruby then be sure to refer to our list of London's best.

If you like your curry with atmosphere and cocktails, then one of Dishoom’s café-style eateries is an ideal night out. The restaurant is designed like an old Bombay café; tables are packed in with Brentwood chairs keeping you comfortable and the traditional Bombayan curries are served fast. The atmosphere is buzzing; the lights dim and the menu of spicy cocktails are guaranteed to tweak your taste buds – and don’t get us started on the soft-shell crab. They don’t do bookings, but there’s plenty of space at the bar if you have to wait. 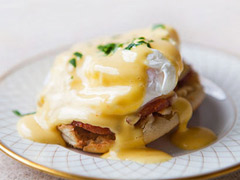 It's the most important meal of the day, so they say, so why not make it a ruddy good one?

If you fancy starting your day with something a little different, Dishoom’s Indian flavours are bound to perk you up. Both their Shoreditch and <a href="http://www.allinlondon.co.uk/restaurants/restaurant-13752.php">Covent Garden</a> branches open for breakfast, serving bacon naan rolls, spicy scrambled eggs, and Bombay omelettes with coriander and chilli.

Reviewed by T.A.O
If you order one thing on the menu make it the pulled-lamb sandwich. Possibly one of the best filled sandwiches around. The chilli and slaw on the side complete it... and it completes me.

Of course, finish with a mango lassi.

A hip place and good for a big group of friends.