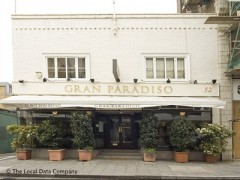 Gran Paradiso serve a selection of Italian dishes at their restaurant. They can cater for private parties of up to 80 people upon request and provide a non smoking area.

Reviewed by Margaret from Surrey
We eat here regularly, and really enjoy the whole experience. It is not just the good food, but also the ambience: it is quiet, the table are well-spaced and it is joy to be served at tables with white cotton napiary, and by staff who are not over-obtrusive.

Reviewed by Cathy B from USA
I do not know what the other complaints are about but I have been there 5 times and the food was great. The service was sometimes slow but when I was there the place was always packed. I reccomend it.

Reviewed by Wendy from London
Four friends and I visit this restaurant. It was almost empty, however a rude little man greeted us at the door, looked us up and down and informed us he didn't have a table! We went to Dim-t instead - Fantastic food and lovely staff and very busy! Gran Paradiso there is a reason you are empty!

Reviewed by Pippa K
Have always been quite shocked by some of the reviews Gran Paradiso gets...my husband and I really love this restaurant and we go regularly. Absolutely love the food especially the pasta...seafood linguine and the a penne tartufo being our favorites. We've always really liked the atmosphere - quite relaxed and friendly. We gladly recommend this restaurant to our friends!

Reviewed by maythemonth
I was thoroughly disappointed by this restaurant. A lovely looking Italian restaurant with halfway decent food was ruined by the terrible service we received.

The serving staff were incredibly rude and when we raised it as an issue rather than apologise they proceeded to continue to argue back.

The food was adequate although for the price (around £30 for starter and main) you might expect a bit more. For an evening dining experience it was sorely disappointing.

Reviewed by Stephen Bishop from Surrey
Having previously noticed mixed reviews, I chose this restuarant because it was conveniently placed for a lunch date. The ambience was good and the service fine. What let it down for us was the food. The salad that accompanied prawn cocktail starter was swimming in dressing to the extent that it overpowered the dish. The fillet steak (with mushrooms and cream sauce) that followed was unpalatably tough. Given the quality of the food the £80 for the meal, 3 starters (1 as a main course) 1 main proper, 1 dessert, 1 G&amp;T, water and 1/2 bottle of wine was a little steep.

Reviewed by Anonymous
I called in advance to book a table for 14 people at a quiet time (5.45pm-7pm). I was told this was ok.

The evening started off on a sour note, as the managers approached us and started to severly tell me off for asking if I could pay for the drinks seperately. From that moment on, even though they were apparently 'very busy upstairs' the managers hovered around our table, making us feel extremely unwanted and uncomfortable.

The food was amazing though, and the waiters were fine, it was just the fowl attitude of the managers that means I will NEVER be setting foot in that place again.

They even tried to charge me service charge after treating us so badly! They said 'you have to pay it in a place like this, this isn't Nandos' - I wish I HAD gone to Nandos after all! In the end the manager called me 'offensive' for refusing to pay the service charge, a charge which would only go into her pocket and not that of the lovely waiters.

So if you want to go for a pre-theatre dinner I don't suggest this one! Try queuing at Prezzo or something...

Reviewed by Anonymous
We just went for a dinner at Gran Paradiso today. The food was very good and the service was quite nice as well. The restaurant has a quite good and relaxing atmosphere. We really enjoyed it and will certainly go back there.

Reviewed by marthalynne
We were actually looking for another restaurant when we saw Gran Paradiso and decided to give it a go. It wasn't particularly busy so not a great atmosphere but we enjoyed a delicious meal with bottle of decent wine, so that's starter, main course, pudding, wine, coffee - for two 65 pounds plus tip which we thought was reasonable. Oh yes, that also included a pre dinner vodka and tonic each. Noticed that the couple on the next table didn't bother with starters but ordered pasta with just a glass of wine each and they seemed to be regulars which it itself speaks volumes. We will certainly be going back again and incidentally we have renamed it Bella Bella after it's charming owner

Reviewed by Peter Scargill
As the restaurant was close to our hotel, we booked an important business meeting at the Gran Paradiso - despite my reservations having seen some pretty bad comments on the web. The comments were correct... the food is ok but the attitude of the staff beggars believe. When the waiter came to take the order he came to the lady at the table first - as she was undecided, we asked if he could start with one of the men at which point he was REALLY rude and said he didn't have time and would come back later!!! If you don't care about service - it's ok - if you do - try the Indian along the road.

Reviewed by sw18_anon
Summary: poor food, worse service, overcharged us and no chance we'll go again. Waiting staff were unsmiling and brusque. The food was below average - and not good value. The penne with steak in a tomato sauce was very dry and tasted like it came straight from a can. When we told the manager (never friendly to begin with) we'd like to decide the tip ourselves, he became cross, said this wasn't possible, that he didn't have time to waste on things like this and disappeared without explanation. We ended up not tipping. Even so, they got the last laugh: they'd overcharged us for the main - but by then we'd had enough and called it a day.
[Forgot to alter rating on 1st review - 1 star!]