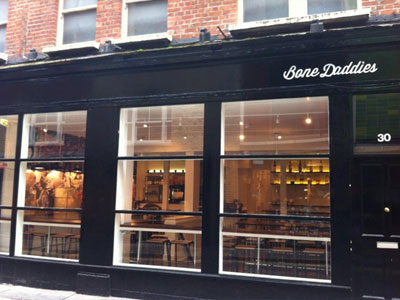 If we could eat here everyday without turning into a Sumo with a permanent ramen sweat on, then we would. That ramen broth, that sweet, deep, deep, meaty broth...

This Ramen bar comes to you courtesy of Ross Shonhan, previously of award-winning Japanese restaurant Zuma.

Come here for noodles, get a lot more! There are no reservations; you simply walk in, sit down and get going! 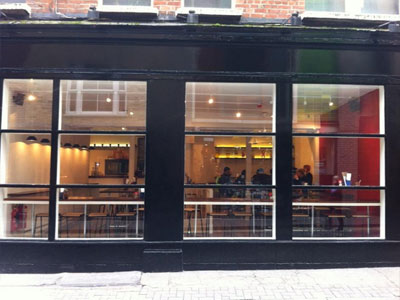 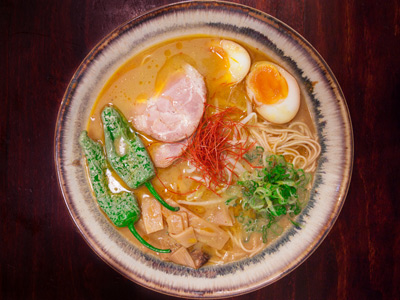 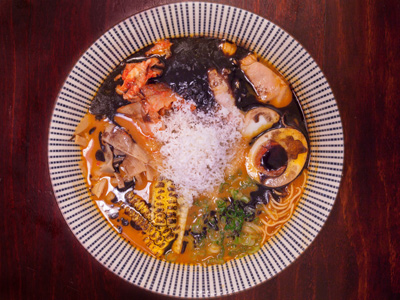 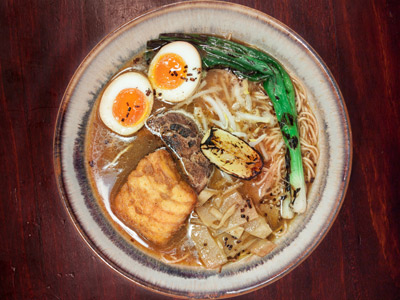 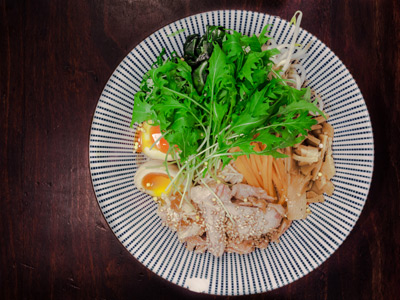 Ramen bars are the new “in” thing, but that’s not why you should go

Ramen bars are the new “in” thing, and if you weren’t aware of this a quick glance inside the crowded Bone Daddies, with its minimal décor, high stools and rock’n’roll soundtrack will soon make this clear.

This wasn’t the first ramen bar to open, as that honour goes to Tonkotsu, another cramped, buzzy venue just moments away on Dean Street (we’re purposefully leaving Wagamama out of the equation), however Bone Daddies benefits from the expertise of chef Ross Shonhan, who’s worked at Nobu in Dallas and Zuma in London.

There are eight ramen dishes on the menu, priced between £8 and £10. The T22’s “cock scratchings” are moreish crispy bits of chicken skin and fat, which float alongside pieces of tender chicken and boiled egg. The chicken bone broth has plentiful noodles, soy sauce and wakame seaweed, making it filling and delicious. The same goes for the tonkotsu ramen, where pork belly has been stewed for 20 hours to give the liquid its rich, creamy flavour, and spring onion and ginger add freshness.

It’s not just the ramen bowls that are great. A whole boiled artichoke, halved in two, is served with a buttery dressing with citrusy yuzu and a fiery aftertaste. Four pieces of soft shell crab have such fierce-looking claws it makes biting into their crisp fleshiness all the more satisfying. The crab is wonderful dipped into an intense chilli ginger sauce, which has hints of lemongrass and lime.

Bone Daddies is the first restaurant outside Japan to serve Asahi “Super Creamy Head”, which as the name suggests, has plenty of froth. We also try one of their selection of shochu, the Kirijima Black Koji made from sweet potato; it smells lethal, but the taste is clean and smooth.

It’s easy to see why the place is packed, and opening till midnight means they may get a few extra post-pub punters. There are no reservations naturally, as if further proof of hip-dom were needed, but forget about trends and just go, because it’s really really good. 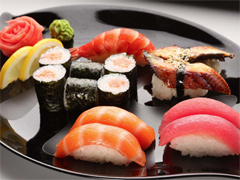 The best places to eat Japanese food in London

Opening up ultra-rich ramen to London has made Bone Daddies a popular restaurant. Affordable, hip and lip-smackingly good, the diner-style restaurant has a ‘no booking’ policy so expect a few queues. 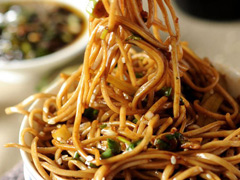 Who can resist oodles of noodles?

At Bone Daddies ramen is served in bowls of rich broth with meat that’s been stewed for many hours, rendering it tender and delicious. A selection of shochu and a rock and roll soundtrack complete the experience. 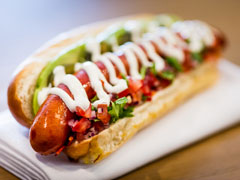 Celebrated for one great thing

Comforting bowls of ramen, strong liquor and rock’n’roll are the order of the day at this hip no-bookings eatery. Chef Ross Shonhan, who has worked at high end restaurants Zuma and Roka, tops his noodles with things like kimchi, pork mince and scrambled egg, while the broth simmers for hours for maximum flavour, like the 20-hour pork broth. 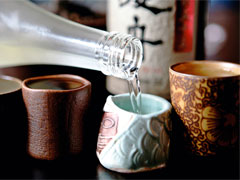 Try a Sake in London - find the best bars

London's rock'n'roll ramen joint has speciality sakes like a sparkling variety and a yuzu-flavoured one. It's a keenly priced, high energy, super fun kind of place.

Reviewed by T.A.O
Head here on an empty stomach because you're about to eat the richest ramen of your entire life! The broth is incredible, the creamy Asahi lager is just as good as the one I drank in Tokyo this February and the raw yellow fin tuna is some of the finest I've had.

Plus you get the option of wearing a bib with what looks like a winking Japanese baby Elvis on it, which is always a positive...