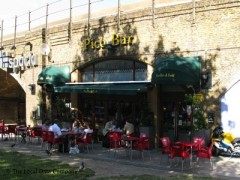 Ads by Google
Tweet
About: Pico is a Portuguese restaurant and Tapas bar.

Add a PhotoSubmit a Top TipWrite a Review
User Rating: 2 / 10

Tonight i went to Pico Bar for a meal, and was expecting a great service and food as before. I have been going to the restaurant on numerous occasions and was very happy about the quality in the past. BUT tonight it was a complete disaster!!! I ordered a fillet of beef, and specifically told the waiter that i want it well done. My meat came in the shape of 3 pieces of beef, two of which were cooked well and the third one was completely uncooked!! The food was also unseassoned. I let the waiter know that my meet was not cooked properly and they took away my food to recook it. They brought it back very quickly, but the food still was uncooked. I decided not to eat it and asked for a bill. The stuff seemed angry and the waiter that was responsible for my table decided not to bring me the bill but instead asked his collegue to bring the bill. The stuff didnt even bother to appologise for the poor quiality. When the bill arrived i saw that a service charge of 10% was included and told the waiter that i am not going to pay for service charge. Stuff attitude needs radical changes, however, the restaurant itself has the potential. The portions are relatively big.
Added on Sat 08 Oct 2011 at 22:10:55 [report] [respond]
User Rating: 4 / 10

ive been going to pico bar on and off or about 5 yr now, and during this time ive noticed the quality and taste of food to slowly get poorer and poorer. This is not a cheap eat, therefore i expect quality food. They used to be great, and the service is still very good, but the food left me very dissapointed this time around. I ordered squid as a main meal and it arrived presented well, but totally totally tasteless and bland, as if it were boiled. I gave it away-i regret not sending it back now. The chicken wing tapas was unseasomed grilled wings-im sorry but another famous portuguese chain do a better job, the steak was good, but again underseasoned, however u do get big portions. Chips and veggies come served seperately by the waiter off a platter and regardless of whose plate included chips they still get some, however its a bit unorganised and people who did order chips get less although they are plentiful. Bread and olives are served on table before olives and there is a good portuguese vibe here, and tv's showing footie matches are situated in various points which is good, butvall in all tasteless food. The garlic prawn tapas hich used to be so delicious now needed salt and lemon in it for it to taste good.
The deserts are located in two large fridges and you can choose them urself, and you get massive portions enough for two to share-however again taste is poor and all desserts taste the same-u just get different veesions of each one.
Added on Sat 26 Feb 2011 at 15:04:46 [report] [respond]
User Rating: 10 / 10

Sylvia, London
Added: Feb 2011
Amazing food, generous portions and excellent prices for the quality you get. I have been there a few times and have no complaints of the service or quality.

Really like Pico's. Have been back several times. The food is declicious and hearty and really good value plus very generous portions! My partner who is Portuguese also agrees and loves coming back here for some authentic Portuguese food. Have always found the staff to be friendly and efficient. The atmosphere is laid back, not fancy so you can really relax but if you like football you may be distracted by the football on the telly.
Would highly recommend Pico's for a chilled and delicious well priced night out.
Added on Sat 26 Jun 2010 at 12:06:09 [report] [respond]
User Rating: 9 / 10

I have found the Pico Grill to be excellent for both food and service. The menu is extensive, the food authentic Portugese - very well prepared with generous portions. The service is better than most London restaurants, excluding the very upscale 5 star variety . The prices are very reasonable for the quality of the food and service. The wine list is good, many Portugese wines that are quite good.
I travel worldwide and make it a habit to check out the best local restaurants. The Pico is not 5 Star, but it is one of my favorites.

Heavily dissapointed with both service and quiality of food. The rice was so full of shards of chicken bone that it felt like we were eating barbed wire. Everything else was bland and very tasteless, and when we refused to pay for some of the food at the end they didn't even question it, or apologise. I get the feeling they have had this situation a few times before. We have had friends who went and enjoyed the pizza but I strongly advise not to eat the tapas unless you have lost the ability to taste! The staff could try and be a bit more enthusiatic too, smiling is a gift given by God that too many people seem to have lost. If it is that terrible working there go get another job, even McDonalds staff are much more happy and friendly. Avoid!!!!
Added on Fri 26 Mar 2010 at 13:58:27 [report] [respond]
User Rating: 8 / 10

I have to stay in London on literally dozens of times per year.During these visits, I have stayed in some of the finest hotels the City has to offer and eaten at some of the most exclusive restauarants.Take it from me and fellow officianados, if you are looking for quality, fresh and authentic Portuguese food, which you can eat in a relaxed, convivial, atmosphere, then look no further than Picos!!
NB Did I mention what fantastic value for money this place is?
Did I mention how pleasant the staff are?

Im Portuguese myself and have a good understanding of what Portuguese food is meant to taste like and this did not come close. The service was poor, hard to grab the attention of the waiters when you were ready to move onto your next course, even though they were all standing around making small talk.
The food was extremely salty, tough to eat and definately NOT fresh. Personally, i wouldnt even feed the left overs to my own dog!
When ordering dessert we were told to choose from an array of cakes on show. Unfortunately we picked a chocolate gateax which the waiter worked on for 10 mins to make it look rather impressive however, we later found out why. The cake was stale, rock hard and smelt rather off.
In conclusion, i was highly dissapointed and would advise people not to spend their hard earned cash on this place, which may i also add is rather expensive.
I highly recommend Cantinho de Portugal or Estrela for a decent meal at an agreeable price.

I have visited London for the last two years and have eaten at this restaurant on 4 occasions. It has a wonderful atmosphere and the staff are very friendly. The char grilled fillet steak is to die for. For a central London restaurant it is very reasonable.
Added on Mon 23 Feb 2009 at 17:40:15 [report] [respond]
User Rating: 10 / 10

I work nearby and my colleagues and I used to go to Pico regularly - we even used to take new starters to lunch there. However, every time we return the staff look at us blankly as if we have never been there before. They always ask if we have booked then give a loud sigh when we say that we haven't - even though there are always at least 10 empty tables. The service is so appalling that, as a (sizeable) company, we have decided not to go to Pico anymore.
Added on Fri 03 Oct 2008 at 10:34:22 [report] [respond]
User Rating: 10 / 10

I too have been to Pico many times, I have really enjoyed going there over a number of years in my lunch break and I have also been back in the evening for dinner!!


The service is very good, the staff are friendly and I always feel genuinely welcome!

The food is fantastic.. I have tried most things on the menu and the desserts are fresh and delicious.. they have music playing softly in the background.

I would recommend this restuarant anytme of the day or night.

I have been to Pico many times and I have never been disappointed. The food is delicious and is very reasonably priced. The staff are always very friendly and efficient. I can't wait to go back there again!!

Really delicious with great volume, good range of choice, very very very reasonable price, lovely atmosphere, nice staffs, ... this restaurant is definitely one of the best I know! I can't wait to go back there again!!
Added on Wed 05 Sep 2007 at 20:01:27 [report] [respond]
User Rating: 10 / 10

This place is fantastic!! We have been there about 10 times and have never been disappointed. The staff are always very friendly and efficient, and the food is amazing! Their T-bone steaks and paella are always good - and everything else on the menu is very tasty too! It is also very reasonably priced.
Added on Tue 02 Jan 2007 at 09:01:03 [report] [respond]