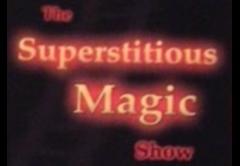 For the superstitious night owls, the beguiling Richard Leigh presents this unusual themed magic show in the West End.

This show is part of the 'Late Night Magic' project which celebrates 12 years at the Jermyn Street Theatre in London's West End.

Magic certainly belongs to the night on this evening. When things go bump and the sleight of hand seems that bit more mystic. The beguiling Richard Leigh is your magician in residence with an equal mix of precision and fast - paced tricks. His stage magic is big and bold, This is a night that has more than the wave of the wand, with themed magic covering topics of superstition, fears, phobias, good and bad luck.

Doors open at 10.35pm. The show finishes just before the witching hour of midnight.