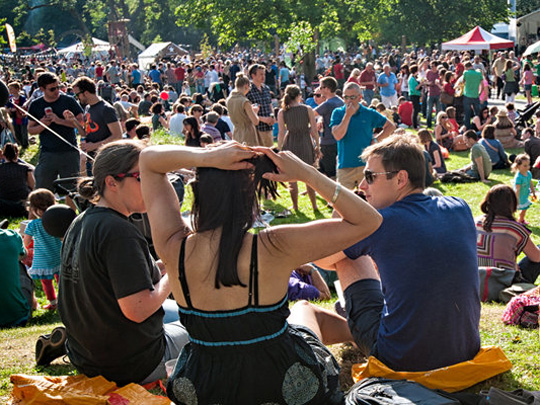 After a year off, the Crystal Palace Overground Festival is back bigger and better than ever before with a move from Westow Park to Crystal Palace Park.

The main park event at Crystal Palace Park will be held on Saturday 17 June with the return of the Crystal Palace community fringe festival events taking place between Monday 12 June and Sunday 18 June 2017.

Past festivals have been a beacon of creativity for a very diverse audience, providing high quality eclectic, inspiring, sometimes audacious and always brilliant cultural experiences for all.

Line up so far is:

Lol Hammond (Drum Club/ Vertigo Films) – Lol has been around since the early 90s as part of Spiral Tribe and then he founded the Drum Club, both the seminal club in the Soundshaft (remember that?) and as part of a recording duo with his partner Charlie Hall. He is currently a Music Supervisor at @Vertigofilms, Music Producer and member of Drum Club Credits inc Football Factory, Bronson & The Sweeney.

Chris Coco (Melodica Recordings) – Chris Coco has been working as a DJ since the acid house explosion of the late 80s. He has edited DJ magazine, worked for BBC Radio 1 on the after hours show The Blue Room. He has made artist albums for Warp and Distinctive Records. His music style has developed from those original house beginnings and draws on those years of experience. His club/festival/party sets are mainly proper house featuring the best of the current releases and a selection of classics with a little slo mo disco and a few eclectic surprises thrown in. He currently broadcasts and syndicates a weekly electronic music radio show called Melodica and runs his label, Melodica Recordings, out of his studio/office in London.

DJ Prime Cut (Scratch Perverts) – with his partner Tony Vegas, DJ Primecuts has moved between genres with ease and finesse and enjoyed a long residency at Fabric in London. They’ve supported The Beastie Boys and The Sex Pistols amongst others and these days continue not only to DJ around the world but also to create their own music.