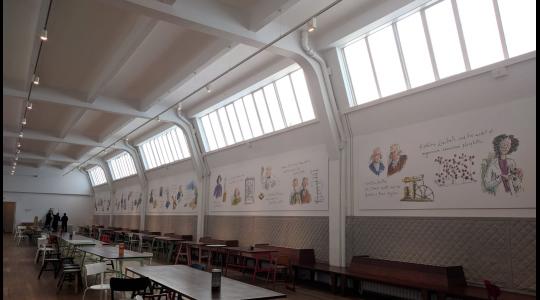 The acclaimed and much loved illustrator Quentin Blake has been commissioned by the Science Museum, London to create brand new art work for the walls outside its family friendly Wonderlab: The Equinor Gallery, for visitors of all ages to enjoy.

Renowned for his humorous drawings and in particular his phenomenal contributions to the great works of children’s literature including books by Roald Dahl and David Walliams, the museum is thrilled that he has consented to create a series of five large panels to hang on the white walls outside Wonderlab: The Equinor Gallery. Each one features his brand new illustrations of objects and scientists from the Science Museum Group’s extensive and historical collection – bringing them to life in a creative and engaging way for family audiences.

A total of 20 women and men from the world of science and technology feature in this new work of art – four on each panel - alongside illustrations of the objects for which they are best known. The “enchantress of numbers” Ada Lovelace adorns one panel alongside the analytical engine on which she wrote a detailed and penetrating explanation of its significance. Next to her is polymath Jagadis Chandra Bose (1858-1937), the first scientist to use a semiconductor junction to detect radio waves. Sir Richard Arkwright (1732-1792) features on another panel and is illustrated together with his groundbreaking spinning machine next to pilot Amy Johnson (1903- 1942) who flew the first solo flight from Britain to Australia in the aircraft. She is illustrated alongside this very plane, the De Havilland Gipsy Moth.