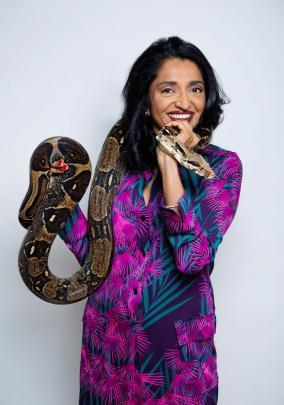 After the sell out success of her debut Edinburgh run that went to several extra shows and secured her an Edinburgh Comedy Newcomer award nomination for her show ‘Sandhog’, Sindhu Vee has announced a full UK tour starting on 1st February in Crawley and culminating on 3rd April in Bath. This is in addition to her two week Soho Theatre run in January, a booking on the prestigious Live At The Apollo and a second Radio 4 series commission means Sindhu has cemented her arrival on the comedy map in a big way!

“Her delivery is calm, collected and classy” CHORTLE

Sindhu Vee, who was born & raised in India and has received degrees from Delhi, Oxford (for which she got a Radhakrishnan scholarship), McGill and Chicago Universities. She also has half a PHD! After a very short stint being an Yves San Laurent model, she changed direction putting her qualifications to good use and had a successful career in investment banking. She has three kids, including two teenagers, with her Danish husband and owns a bizarrely gigantic Labrador…and now in her early 40’s Sindhu decided it was time to change direction and make her parents proud starting a career in comedy….