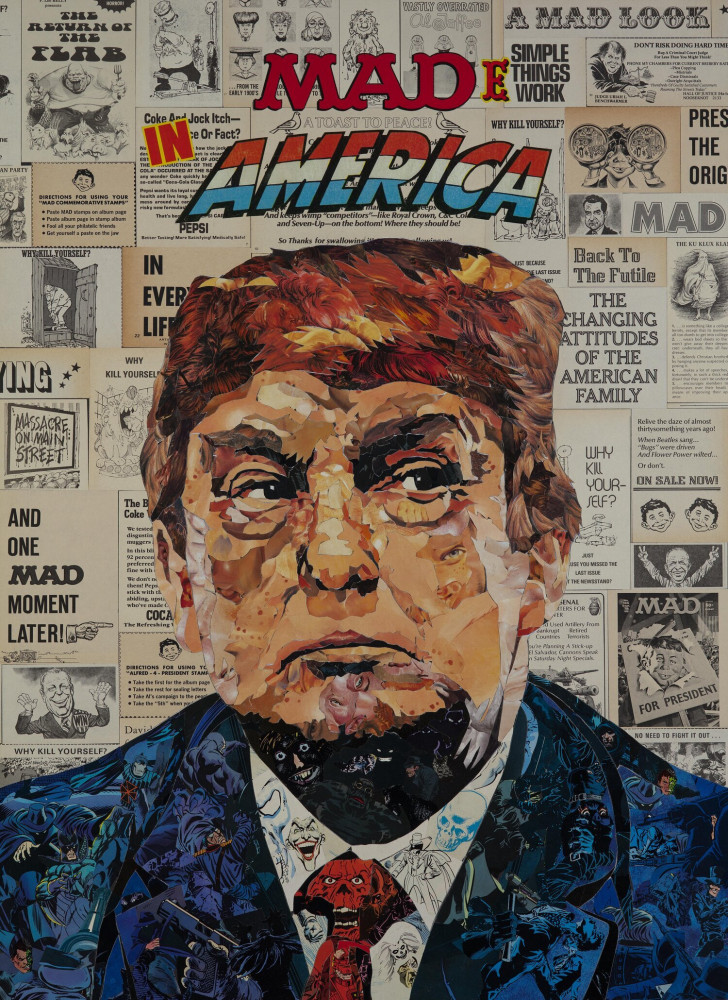 Artist Ben Turnbull presents American History Remix; a retrospective exhibition voyaging through 150 years of America’s tumultuous past at London’s Saatchi Gallery, opening 17th June. With an unashamedly parodic lens, American History Remix is a boldly candid exploration of the nation’s most defining moments, from the birth of the ‘American Frontier’, via the Kennedy assassinations to the darker days of gun culture and the inauguration of Donald Trump.

American History RemiX subverts the childhood innocence of comics, action figures, colourful collages and school paraphernalia to reimagine U.S history through the eyes of a troubled child, like that of Sid from Toy Story. On display for the first time, Turnbull’s latest work Seduction of the Innocent (2021), created during lockdown, is inspired by psychiatrist Frederic Wertham’s 1954 book of the same name that warned comics were damaging to young minds. In his signature ‘Angry Pop’ style Turnbull offers an alternative theory using the very comics Wertham condemns, manipulating these to expose the engulfing web of America’s political mayhem with unforgiving accuracy.

Bringing together a body of work created over 15 years, including never-before-seen pieces, American History RemiX is a shocking encounter with the U.S’s uncomfortable truths. The chillingly satirical collage of Harvey Weinstein’s portrait in American Horror Story (2020), pieced together from smiling magazine shots of Hollywood women emblazoned with ‘Creepshow’ invokes the dark reality of America’s history that takes place behind the glossy façade. Throughout, the polarity between the innocuous and the appalling is magnified, as works like the I Don’t Like Mondays series (2008), featuring weapons carved into school desks - a commentary on gun massacres in U.S schools – mimic the extreme sides of America’s history that has gripped the world for decades.

American History RemiX follows Turnbull’s successful Manifest Decimation exhibition of 2019 in an age of healing for America, as the nation begins to assess, enact new movements and repair the damage of recent years. Challenging the way we perceive history, this exhibition continues Turnbull’s ongoing exploration of the struggles that define one of the most powerful countries in the world.