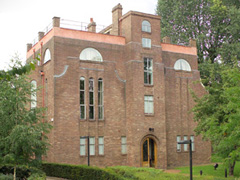 Dorich House Museum was the home and studio of Estonian sculptor Dora Gordine. She made a name for herself by making bronze busts, and once she moved to the UK by doing sculptures of British society members, introduced to her by her husband, the Hon. Richard Hare. Hare died unexpectedly of a heart attack in 1966, but Gordine continued to live in the house till her death in 1991. It was their wish that the house be open to the British public, and Kingston University unveiled it as a museum in 1996.

The museum has the single biggest collection of Gordine’s bronze and plaster sculptures, paintings and drawings, as well as the Russian Imperial Art collected by her husband. Gordine was also an interior designer and much of the house was designed by her.