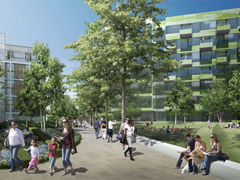 The Chelsea Barracks were originally constructed in 1860 to house troops, however the original Victorian buildings were replaced with concrete tower blocks after the Second World War. In 2008 the troops relocated to the Royal Artillery Barracks in Woolwich, after the government decided to sell the Chelsea residences. One of the reasons cited by the Secretary of Defence was that renovations including new training and recreation grounds were needed that could not be carried out without demolishing the building.

The barracks’ location in one of London’s most expensive areas meant that they eventually sold to Qatari Diar and CPC Group for £959 million, earning the title of Britain’s priciest site according to The Times.

Various proposals for development have been submitted to Westminster Council, including an emotional plea by the Prince of Wales to not turn the site into a modern, concrete eyesore. The latest plan included creating homes, a hotel and shops on the site however Westminster has yet to approve.