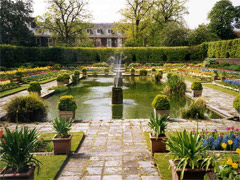 Kensington Gardens spans more than 260 and was originally joined with Hyde Park. The tree lined gardens are also the grounds of Kensington Palace, the royal residency chosen by both William III and Mary II. It was William who bought the land in 1689. Queen Victoria was born in Kensington Palace and spent much of her time in Kensington Gardens before her ascension to the throne in 1837. Kensington Gardens were shaped and landscaped under the careful watch of George II's wife, Queen Caroline. It was she who had the Serpentine Lake built and much of the shrubberies and tree-lined areas where to her design. The Serpentine Lake is popular among model boat enthusiasts. Kensington Gardens was not always opened to the public, when this first happened a strict dress code was applied. One of the most memorable features of Kensington Gardens is the Bronze statue of Peter Pan covered with woodland creature. The Diana, Princess of Wales Memorial Playground sees more than 70,000 children a year using its facilities. The Elfin Oak is an ornate carved trunk, originally from Richmond Park; the carvings are of elves and fairytale creatures. Stood outside the entrance to Kensington Gardens is a sculpture of the late Queen Victoria- made by her daughter Princess Louise.