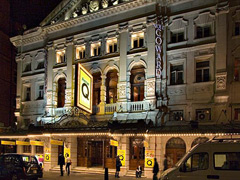 This theatre has been open since 1903, although it was originally called the New Theatre, and from 1973 onwards, the Albery. Noel Coward made his West End debut here in 1920, and other illustrious names to have appeared here include Laurence Olivier, John Gielgud, Vivien Leigh and Katharine Hepburn. During the Second World War it accommodated shows that would have been hosted by Sadlers Wells and the Old Vic, as damage to the two buildings prevented them from doing so. The theatre underwent extensive refurbishment in the noughties after being acquired by Delfont Mackintosh, and it reopened in 2006 with the hugely successful musical Avenue Q. The theatres programming is highly eclectic; past shows have included Frank Skinner and Friends, Chekhov’s Three Sisters, and Calendar Girls. Ticket prices can be anything from £12 to £100, and it’s best to book early if you’re after cheap seats.