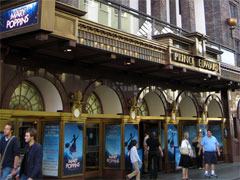 Designed by Edward Stone and with a capacity of more than sixteen hundred, the Prince Edward Theatre was opened in April 1930. The theatre was originally designed to be a multi purpose venue, hosting musicals, revue and movies. The building was chosen as the site for the London Casino which opened in 1936. The building was then converted to a cabaret restaurant, and gamblers and diners alike enjoyed spectacular stage shows.

During WWII the theatre became a club for servicemen and was renamed ‘The Queensbury All Services Club.’ After the war some of the musicals and revue shows returned to the Prince Edward, and stayed until the theatre was converted again in 1954, to show ‘Cinerama’ movies.

The Prince Edward Theatre returned to its name and former purpose in 1978 when the celebrated musical ‘Evita’ began an eight year run. Since then the Prince Edward has staged various musicals including ‘Chess’, ‘Anything Goes’ and ‘Some Like it Hot.’

The theatre underwent a massive refurbishment in 1992 and now boasts air conditioning, disabled access and a modern sound system. In recent years it has played Mamma Mia, Jersey Boys (The Story of Frankie Valli and the Four Seasons) and Miss Saigon, and following a successful run of Mary Poppins in 2004, returned to this show in 2019.