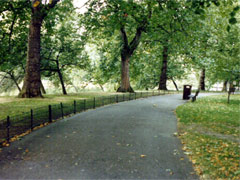 Regents Park was originally a part of Middlesex Forest before it became the Kings hunting ground. By command of George VI, John Nash built a park here in the early nineteenth century. Nash was to originally build fifty-six villas and a palace upon the grounds- although no palace and only eight villas were ever completed. Three of the villas still remain near the inner circle. To the east of the park lies Cumberland Terrace, arguably the most aesthetically pleasing of Nash's terraces as it was to be seen from the Prince Regents palace.

The palace in Regents Park was never built because the Prince Regent was preoccupied with the building of Buckingham Palace.

Originally John Nash planned for Regents Canal to run through the ground of the park, but was persuaded that the colourful language of the barge workers would offend the refined locals.

Regents Park boasts a boating lake, tennis courts, three children’s play areas and an outside theatre. To the north of the park along Broad Walk lies London Zoo. The external road is over two miles long and is known as the Outer Circle. Though Regents Park is possibly the most refined of London’s parks it is a vibrant and lively place in summer, and hosts plenty of events each year including the annual open air theatre season.

Regents Park is open from 5am until dusk.

Reviewed by TheMog
Regents Park is amazing in the summer. I live in St John's Wood and often go to the park on a sunny day. The park is huge and could easily give you an entire day out! London Zoo is situated at the northern end of the park.

It's amazing to see such an expanse of green in the middle of a city the size of London.