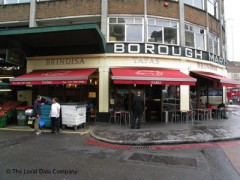 Brindisa features in these AIL lists...

Restaurants for when you're eating alone
Brindisa has a bar with standing room, usually reserved for the throngs of customers waiting to be seated, but the small high tables, window seats and noisy atmosphere are perfect for a solo diner. Most importantly, the tapas are absolutely exquisite.

Since opening, Brindisa’s star has shown no sign of waning. On the contrary, the success of their gourmet tapas, made with simple yet tantalising ingredients, their no reservations policy, and the friendly, bustling atmosphere at their London Bridge eatery has meant that they’ve since been able to open new restaurants in Soho and South Kensington. Plus, Brindisa the company now run an online shop alongside their Borough Market home, so you can get your acorn-fed Iberian ham home-delivered.

It’s good to see that some dishes remain on the menu after many years, like the air cured tuna with pear, a dish of salty, practically translucent sliced tuna, and the deep-fried Monte de Enebro cheese, drizzled in orange blossom honey, with vegetable crisps made from beetroot. These have obviously done well, however it’s a shame to see the sweet black pudding with cinnamon has been removed; perhaps too many complained it was too much like a dessert. Never mind, for we have creamy croquettes with Iberian ham, a pot of glorious homemade aioli with crusty bread, a selection of cured ham, chorizo and salami, and some incredible gordal olives, plump, stuffed with bits of orange and covered in oregano and salt. It’s pricey (£6.90 for four croquettes), but utterly delicious. There’s also a fantastic selection of wine to pair with each dish should you want to splurge, from the crisp white Mas Macias to the unmistakably oaky Riojas, as well as sherry and Spanish beers. The jovial staff chat to everyone, so you may have to wait for a while before being served at the bar, but you can start drinking and nibbling before a seat becomes available. Moreover everyone - customers, waiters, chefs, the guy carving the enormous ham – look genuinely happy to be here, and so are we.

Situated fittingly next to Borough market, this gourmet restaurant offers some of the best (and most expensive) tapas in London. Your wallet may suffer but there is nowhere better for a special treat, as Brindisa offers so much more than the usual fare of meatballs and calamari.

Always packed like a can of Spanish sardines, you can’t book in advance just like at a true tapas bar, however you can have a drink at the standing bar and sample the delights of the bar menu, which include a fine selection of cheeses and charcuterie, morcilla pate (black pudding cooked with cinnamon and orange), and vegetable pisto, a slightly sweet-tasting stew with peppers and tomatoes. The huge bar caters to all manner of aperitifs, and I’ve always had excellent service, if a rather long wait.

The main menu changes regularly, but features wonders such as the surprisingly delicious air cured tuna steak with pear, and tangy Enebro cheese deep fried with orange blossom honey. The flavours are certainly not for the bland, but for those with a love of food and a hatred of the nouveau cuisine habit of a lot of a fuss on a plate about nothing.

Whatever you do save some room for desert, the pears in red wine and rice pudding are out of this world. The wine list is extensive and will please any connoisseur, the Roda II 200 Rioja is possibly the most perfect wine I have ever tasted, and certainly merits its £48 price tag.

A wonderful eaterie with gorgeous food that has managed to retain the charm and substance of any back street tapas bar in Spain.

Dev does Dickens: The Personal History of David Copperfield

On Oxford Street? Take a detour and explore the history of nursing
More features and events