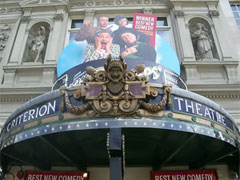 Opened in 1874, The Criterion Theatre is situated within a listed building near the bustle of Piccadilly Circus. It was designed by Thomas Verity, the architect responsible for the pavilion at Lords Cricket Ground and many other London Theatres. Unusually the box office is the only part of the theatre that is above street level; the theatre itself is completely underground. Theatre visitors descend a tiled staircase to reach the three tiered, 585 seater venue.

The Criterion was originally designed as a concert hall, but the restrictions of being situated underground meant that, during construction, the purpose of the venue was changed to that of a theatre. The theatre was forced to close in 1883 because of the dangers of gaslight illumination and poor ventilation. It was reopened the following year with electric lighting and an improved ventilation system.
One criticism levelled at the Criterion is the use of pillars to support the Dress and Upper circle. These pillars can restrict the view from certain seats.