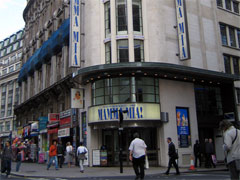 The Prince of Wales Theatre was built by Robert Cromie, and first opened in 1937. Like many of London’s theatres, the designer was the famous CJ Phipps. The site was originally a theatre, opened in 1887, but was demolished to accommodate the new building. The first stone of this new building was laid by the celebrated actress Gracie Fields. The stage area was extensively refurbished in 1963 and can now accommodate over eleven hundred visitors at one time. Beneath the stalls is a large and spacious bar area which boasts a dance floor, previously used for tea dances.

This striking building has now established itself as a familiar and imposing addition to London’s architecture and is now a grade II listed building. In 1959 the Prince of Wales Theatre staged a tremendously successful run of ‘The World of Susie Wong’, and in 1966 Barbara Streisand starred in a production of ‘Funny Girl’. The theatre's longest running production was Andrew Lloyd Webber's musical ‘Aspects of Love’ which began in 1989 and ran for more than thirteen hundred performances. In 1994 Barry Manilow’s ‘Copacabana’ ran for over a year here.

The Prince of Wales Theatre has air conditioning and benefits from having two fully licensed bars and disabled access. The building was once again closed for refurbishment in 2004, rather fittingly the grand reopening ceremony was attended by none other than his Royal Highness the Prince of Wales.