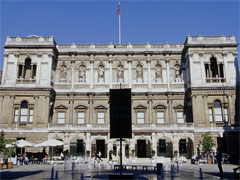 The Royal Academy of Art was founded in 1768 to promote the fine Arts in Britain. Sir Joshua Reynolds was appointed the first president. The Royal Academy of Art moved to Somerset House in 1780 and held an annual exhibition for living artists, the first such exhibition in England. The Academy moved to Burlington Road in 1868 and in the following years studios, a lecture hall and thirteen galleries were added. In 1983 the galleries and much on the lower floor was extensively restored. The diploma galleries were converted in 1991by Norman Foster- the new area is known as the Sackler Wing. The temporary shows exhibited at the RA are the most popular of any gallery in the UK. This means that visitors are required to purchase time allocated tickets in advance for exhibits. The RA generally has two separate exhibitions running at any one time, one in the Sackler Wing and another in the main exhibition hall. Annually the Royal Academy of Arts hosts a Summer Exhibition. The summer exhibition is open to any artist whose work can be safely displayed within the building. There can be as many as a thousand pieces of Art on display during the summer exhibition. The RA runs free lunchtime tours and also boasts an extensive permanent collection including pieces by Michelangelo, Gainsborough and David Hockney.

BAFTA: Behind the Screens